By Daniel Isner – Reprinted from Global Impact Newsletter – Issue 2 (2016)
“For the decentralization of economic power, the devolution of planning is a necessary precondition.”  (Sarkar, P.R Inter-Block and Intra-block Planning, 1986)

Increasingly it has become evident that the social and economic systems we have been refining and promoting around the globe for decades have been failing to address the intrinsic needs of people.  From their day-to-day basic needs to more subtle, emotional needs, there seems to be a fundamental disconnect between the top-heavy development strategies of governmental and non-governmental agencies and the actual reality lived by vulnerable communities all over the globe.  The devastating results of this systemic failure to connect those who struggle to survive on $1 USD per day with solutions to their problems has promoted dependence on foreign aid, corruption, nepotism, feelings of distrust, and lack of initiative.

In a decentralized, balanced economy, the fundamental blocks (i.e. a small area that may encompass a town, a part of a larger city, or a rural area) of economic planning are established, according to Indian thinker P. R. Sarkar, through the formation of social organization units for the purpose of block level planning.  Sarkar goes on to suggest that once the physical needs of people are achieved in a balanced way, equilibrium on the emotional, psychic and spiritual levels can be easier to attain.

In Proutist Economics (1981), Sarkar calls for current political boundaries to be reorganized to take into account the following factors:  the physical features of the area, the socio-economic requirements and problems of the people, and the different physical-psychic aspirations of the people.  Planning in these types of areas is beneficial for ensuring that (1) major and minor problems in the area are properly understood, (2) local leadership emerges to solve problems according to their felt needs and priorities, and (3) the planning process is quick and effective.  Sarkar was optimistic that block level planning can solve local unemployment, enhance people’s purchasing capacity, and establish a solid base for a balanced economy.

Defined by the red mountains embracing it, the hot water springs running through its barren landscape, subsistence gardens and ocean views, the village of Source Chaudes is at the center of Haiti’s thriving Self Help Group (SHG) movement.  Beginning with a couple dozen groups in 2011, AMURT-Haiti and the Haitian organization it helped form, LOCAL (Local Capacity Alliance), have since facilitated the formation of 150 groups with 3,000 women in Communes Anse Rouge and Terre Neuve.  This isolated and impoverished area is in the northwest corner of Haiti which is commonly characterized by failed development schemes, high level of food insecurity, and ongoing environmental degradation. 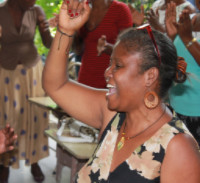 During my first visit to the area in 2013, I witnessed a scene that inspired me beyond measure.  Under a large thatch awning attached to a little cob cottage, around twenty women assembled for their weekly meeting. I sensed in them an air of confidence and purpose; something unlike any gathering I had experienced in all my years living and working with farmers associations in West Africa.  Even before the meeting started, I was convinced that each woman knew exactly what she was doing and why.  After a moment of silence and a song, the women collectively began to chant the root causes of disempowerment and poverty – denial of choices/rights/opportunities, discrimination, disparity, domination, displacement, dehumanization, etc.  By the end of this acknowledgment exercise, these seemingly insurmountable realities no longer held power over these determined women.  Then, in perfect unison, the group reverberated their core, binding principles to further reinforce that which brings them together each week.  The louder they chanted, the more the sweat, tears and determination flowed.  It is then that a realization dawn on me – these women are warriors on the frontlines of a war on poverty, fighting the first battle to reestablish their rights and gain dignity as the key participants in this grassroots process.

The SHG group quickly got down to business and listed the agenda points that would follow the financial transaction period.  Then, taking out their individual cash ledgers, each member made her weekly contribution to the group’s general fund and the social fund, an extra one they created for the purpose of assisting families in dire need.  The group then listened to two women aiming to receive that week’s micro loan.  They discussed both the pros and potential cons of the proposals and, in the end, collectively decided to award both loans.  With SHG principles as the binding element, each group collectively make decisions about their own group’s interest rate, meeting times and other operational specifics.  As groups realize that interest and the cash penalties following a loan default get funneled right back into their group’s hands, it is not uncommon for them to set up 25% interest rates.

With the financial procedures now completed, the group shifted its focus onto the community’s social and development issues.   Solutions to challenges in the community were talked over and time-bound resolutions were made, complete with a signed list of delegated responsibilities for each point.  I sat in awe, witnessing the most tangible grassroots, democratic community-building structure I have experienced to date taking place in the last place I would expect to find one.

In 2016, the SHG movement in Haiti’s Artibonite Department is well established and has expanded to include men as well as associations which focus exclusively on specific production sectors, such as salt and agriculture.  As the community begins to raise its consciousness due to this new self-organization model, a wave of new groups often form organically, including both young and old residents of far-flung impoverished communities.  Identifying the block and establishing new groups is a participatory process involving surveys and reflection which focuses first on the most vulnerable households by mapping their needs and current economic status. This process draws from successful models operating abroad, such as in the Indian state of Andhra Pradesh. The state-sponsored SHG movement there has effectively used this methodology to reduce the rural poverty rate from 26% in 1983 to 11% in 1999 (Planning Commission, Government of India, 2000).  According to Demeter Russafov, Country Director for AMURT-Haiti,

“the SHG model is the lowest input and highest output sustainable project with significant positive ripple effects transforming the community – decreasing gender discrimination, bringing harmony to the community fabric, building leadership and autonomy, and creating a foundation for participatory decision-making at the grassroots level.”

As the SHG structure increases its complexity, it forms higher level representative bodies called associations. These multi-block collectives confront socio-economic challenges head on not only by initiating robust peer to peer lending activities relying on self-generated credit, but also engaging in direct action plans for improving their community’s overall quality of life.  The 150 SHGs now are in the process of forming 10 associations which will serve as the base for a higher-level decision-making body, a federation. The mandate of these associations is to assist the block-level SHGs with capacity building, leadership, literacy, conflict resolution, financial audits, etc.  Leadership at both the association and block level is rotational, allowing for each member to expand his/her skill sets.  Currently, facilitators provided by LOCAL are working to strengthen this association level, while paving the way for the formation of the nation’s first SHG federation.

The functions of the federation can be grouped into four categories: 1) institutional development, 2) financial intermediation, 3) livelihoods enhancement or business development services and 4) social intermediation (Salomo, Rao & Kumar, 2012). In practical terms, federations hold the ability to organize community development initiatives, raise funds, rally support, and advocate for meaningful representation at the regional and national levels.  For example, if a crucial road falls into disrepair, federations can call on individual group members to set aside an extra dollar during a particular month, and due to their large membership base, can quickly rally funds for its repair. This is precisely what Sarkar refers to as inter-block planning which integrates socio-economic development between a few adjoining blocks through mutual coordination and cooperation (Sarkar, P.R Inter-Block and Intra-block Planning, 1986).

The block level represents the necessary foundation upon which community development initiatives can grow.  LOCAL-Haiti is actively engaged in a number of strategic endeavors in the Artibonite Department including 1) Integrated Disaster Risk Reduction involving watershed protection, reforestation, and soil conservation, 2) agroforestry training, accompaniment and infrastructure, 3) social entrepreneurship models particularly in the domain of salt production, and their relationship to integrated rural development.  All of these programs are coordinated and implemented through the SHG methodologies.

The results have been promising, to say the least, and have garnered a growing attention and recognition for its bottom-up gender-focused approach.  In 2004, LOCAL was awarded the annual distinction for Emergent Social Entrepreneurship model by the Digicel Foundation, a prestigious recognition for innovative business initiatives.  Yet perhaps the greatest achievement of this approach is that every participant develops an active voice and tangible stake in the development process.  A personal and collective sense of purpose naturally emerges in this highly participatory and self-affirming process. 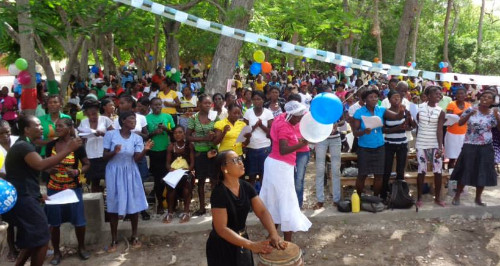 A newly-found autonomy and sense of self-worth permeated the atmosphere of the 2014 annual Women’s Day gathering which I attended.  Every year, up to a thousand women SHG members walk for hours to come together, share their stories and songs, acknowledge their common successes and struggles, and celebrate the symbolic meaning of this special occasion.  I could experience the excitement and joy of these women and felt confident that these women were well on their way towards socio-economic emancipation.  Armed with a unified sense of purpose, they had transitioned from vulnerable and isolated individuals into warriors ready to defy all obstacles in their fight for a new Haiti.

Daniel Isner is an agroforester, wellness educator and father.  He currently works alongside a network of rural, purpose based communities in Tennessee, Haiti, Ghana and Burkina Faso, who are engaged in the advancement of agroforestry, grassroots community building and social entrepreneurship.