In 2011, a community of farmers, designers, developers, engineers, architects, roboticists and open source thinkers came together in Boston, Massachusetts, to explore a simple yet radical idea – that great improvements in agriculture could be achieved by reducing barriers to knowledge exchange. They were convinced that transforming agricultural technology into a commons would result in a more adaptive, open and resilient food system, one that would reflect the values not just of the grower but of the larger community as well. The path toward a more distributed and just agricultural and economic system, this gathering of people concluded, would come into being through the collective development of new working prototypes and universal access to a constantly improving repository of best ideas and practices.

Thus began Farm Hack, an ambitious volunteer project that brought together the seemingly disparate cultures of technologists and agrarians. The start of Farm Hack came with an offer from M.I.T. to host a teaching event that could connect engineers with farmers’ needs. The National Young Farmers Coalition had just started a blog called “Farm Hack” and launched the first program, followed closely by more events held in partnership with GreenStart and Greenhorns agrarian networks and maker/hacker networks.

The Farm Hack community quickly expanded through online and in-person social networks across the east and west coasts of North America. Within three years, it became a user-driven, collaborative community of ideas and tools with many thousands of active participants. Hundreds of thousands of visitors from every continent were soon contributing tens of thousands of hours to the platform. Farm Hack has become a rapidly growing repository of agricultural knowledge, containing scores of open source designs and documentation for farming technologies and practices. In effect, Farm Hack is an emergent, networked culture of collaborative problem-solving.

Hacking has been defined as the art of coming up with clever solutions to tricky problems by modifying something in extraordinary ways to make it more useful. Hacking also means rejecting the norms of consumer culture, and imagining ways to modify, improvise, and create new, accessible, custom solutions for particular problems. Not surprisingly, both hacker and maker culture are a natural fit for the sustainable agricultural movement. Both cultures formed in response to ongoing, hegemonic attempts to control users’ access to basic technologies and other resources. Both arose from a realization that open access to knowledge is the best strategy to counter dominant industry interests. This has long been an inherent part of agriculture in general, and a critical part of sustainable agriculture in particular. On most farms, identifying a problem, thinking of a solution, testing that solution and assessing its efficacy while thinking of the next iteration is a daily practice.

Within its first year, the Farm Hack website featured documentation for over 100 innovative agricultural tools. They ranged from manufacturing instructions for newly created farm-built hardware such as garlic planters, to the remanufacturing of an “extinct” farm-scale oat huller. The community contributed designs for greenhouse automation and sensor networks and business models for organic egg enterprises.

The power of open source exchange is illustrated by the quick pace and diversity of modifications and improvements made to tools on Farm Hack. One of the first greenhouse monitoring projects was turned into an electric-fence alert system, which quickly evolved into an automation and data logging system, which then spun into businesses selling kits. An organic no-till roller made open source by the Rodale Institute in Pennsylvania was quickly modified in New Hampshire, then Quebec, and then France and Germany; the latest versions being built in New York are based on German and French improvements made six months earlier. In this production model, inventors increasingly may not be able to predict the ultimate use of their tools, as the ultimate use will be collaborative and emergent.

Despite being an all-volunteer organization, operating without a budget until 2014, Farm Hack partnered with dozens of organizations, universities, open source and maker communities in the US and Europe to expand the network. In addition to providing an online forum and repository for the community’s knowledge and tools, Farm Hack has hosted in-person and online events to document and improve tools, foster sharing and build skills. In these events, the group carries on the agrarian club tradition of mixing participatory education with lots of good eating, drinking and socializing.

With growth of the community came greater financial burdens of hosting and guiding the conversations and idea exchanges. The community also needed to evolve in its role from organizing and planning, to facilitating, guiding and recruiting new contributors. Initial funding to support these needs came indirectly through the founding partner organization budgets supplemented by contributions from community volunteers. It was three years before the first general grant support was secured. A university extension program wrote a grant on behalf of Farm Hack to document, measure and extend the reach of USDA Sustainable Agriculture Research and Education (SARE) funded projects.

To manage the challenges of growth and expansion in its third year, the Farm Hack network adopted a set of ten principles; participants wanted to maintain the representative open agrarian values of the network as they interacted with established power structures. The collaborative and flexible structure of the organization, and rapidly evolving tools for remote collaboration, became important ways for the organization to evolve while remaining representative and emergent. For example, a collaborative tool currently in development, by the community and for the community, is a best practices template for open source project contracting to help navigate the tension of having paid and volunteer efforts working side by side. The template is exploring the awarding of bounties and other rewards for commercial contracts, special recognition to volunteer efforts, and pooled payments or retainers on a project-by-project basis for participants.

Farm Hack has blended a rich set of old and new traditions – the Enlightenment salon ideals of the eighteenth century and those of the open source software movement. Both believe that the natural state of knowledge is to be free. Farm Hack also looks to the Physiocratic worldview of nature-governance articulated by Quesnay, Jefferson, Locke and Franklin, who regarded the productivity of the soil, and the education of the populace to provide for their own livelihood, as necessary for liberty and the health of a culture. From this perspective, agricultural production is the root of sustainable civilization. It is not just an occupation, but a foundation for the shared cultural values of a healthy society.

Well before the Internet, Enlightenment thinkers pioneered the idea of crowdsourcing with their community-created Encyclopedie: A Systematic Dictionary of Sciences, Arts and Crafts, first published in 1751 and written with over 2,250 contributors. More than 250 years later, the contemporary open source software community is pioneering the development of networked tools, such as wikis, forums and collaborative documents, all of which facilitate social cooperation and trust. Building on these models of voluntary reciprocity, Farm Hack implicitly challenges the prevailing norms of conventional agricultural economics and research. It challenges not only what types of questions are asked in agricultural research and development, but also who asks the questions, the types of tools that are produced, and how they are financed.

The Farm Hack community believes that the tools, seeds, and techniques used in agriculture should both reflect and benefit those who intend to use them, not just those intent on selling them. Through an ongoing amateur inquiry that connects farmers with other farmers, designers, engineers, and thinkers, Farm Hack has embraced, woven together, and expanded upon preindustrial and modern hacker/maker ideals. Its open, social collaboration creates the potential for every farm to become a research farm, and every neighbor to be a manufacturer, drawing upon a global library of skills and designs.

An Alternative Template for Agriculture 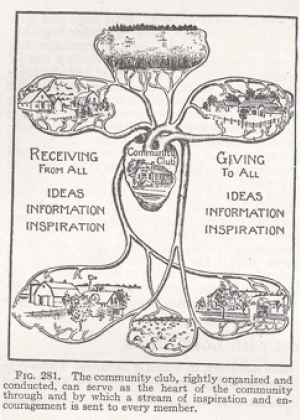 From Encyclopedia of Practical Farm Knowledge, published by Sears and Roebuck, 1918. Available atarchive.org.

By documenting, sharing, and improving farm tools and associated know­ledge, Farm Hack is not just framing agriculture as a shared foundational economic activity. It illustrates an alternative template for local manufacturing and provides greater citizen choice, control and local self-determination. The primary limiting factor in agriculture shifts from the (negative) extraction of scarce natural resources to the (positive) expansion of skills and systems understanding of all participants. Farmers are able to learn better ways of harnessing the complex biogeochemical flows of atmospheric carbon, water, and nitrogen into productive and resilient agroecosystems. The emphasis shifts from efficient extraction of resources to skilled regeneration of resources using all available knowledge.1Seeessay by Eryka Styger on the System for Rice Intensification (SRI). The focus becomes improving rather than diminishing the natural resource base.

Another contribution to the rapid expansion of Farm Hack’s community has been its reliance on the network structures and administrative tools pioneered by other open source communities, including Drupal (blogging software), Wikipedia (wiki collaboration), Open Layers (Java script software), and Apache (server software). It has been able to build trust, grow, and adapt while making its own unique contributions back to the commons. Another important tool used by Farm Hack is the Collective Impact Framework, a structured approach that allows organizations to use collaborative tools to form common agendas and adopt shared measurement tools, mutually reinforcing activities and continuous communication among diverse sorts of participants.2John Kania and Mark Kramer, Collective Impact, Stanford Social Innovation Review, Issue 73 (Winter 2011), available athttp://www.ssireview.org/articles/entry/collective_impact. This Framework has been adopted in order to enable the community to identify and reduce overlapping, duplicative efforts, and to build upon the cumulative achievements of the broader open source community.

Farm Hack’s online platform is a prototype for implementing this framework in the context of open source agriculture practices. Just as symbiosis is as powerful an influence as competition in nature, Farm Hack believes that it can help turn the conventional agricultural research and development system on its head. By creating tools and social norms that reward, refine, test and evaluate collaborative production, it is possible to stimulate rapid, reliable community knowledge and innovation.

In 1726, Jonathan Swift famously wrote, “Whoever could make two ears of corn or two blades of grass to grow upon a spot of ground where only one grew before, would deserve better of mankind and do more essential service to his country than the whole race of politicians put together.” The quote embodies Farm Hack’s partial but expanding achievement: By creating open source repositories of knowledge and technologies, it is bypassing the dominant political and economic power structures behind industrial agriculture. Farm Hack is shifting the balance from those who derive their power through the control of scarce resources and knowledge to those who mix their creative skills with nature in order to create abundance.

Dorn Cox is a farmer in Lee, New Hampshire (US), where he continues to develop and refine open source agricultural research and development systems to improve farm productivity and resilience. He is a founding member of Farm Hack, the New England Farmers’ Union, GreenStart, the Great Bay Grain Cooperative, and the Oyster River Biofuel Initiative. He has a B.S. from Cornell University and a PhD from the University of New Hampshire.